I was not overly impressed with the Victory Bar at Port Louis Marina when I visited, but that might have more to do with the time I visited than with the place itself. I hooked up with my old high school crew one week night and we went there for drinks.

Some of the guys taking a drink 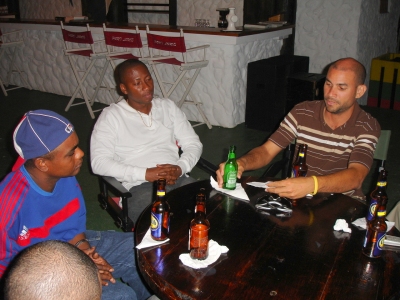 Maybe going there on a week night was not such a good idea. I normally like things to be hopping. Not too crowded, but just enough folks, and chatter to add some life to the place if you know what I mean. A little music doesn’t hurt either.

Well it was far from lively. But that certainly did not stop us from having an awesome time. All you need are cold Carib Beers, some food from their grill, good friends, and you’re set.

Both the bar, and it’s surroundings are beautiful, even at night that stood out. I can only imagine what it must look like in daylight. I think you will be impressed. The Victory Bar is part of the spectacular Port Louis, a multi-million dollar luxury resort and Marina, that’s the brainchild of British Entrepreneur Peter De Savary.

See those red roofs?… that’s where we were. I took this shot from Fort George 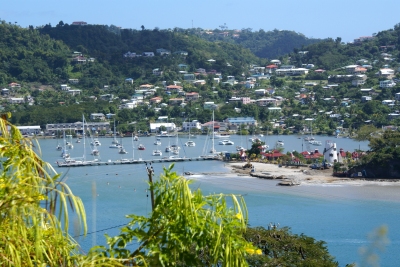 The bar sits on the edge of the lovely marina, in the Lagoon Rd community. It’s right off the main road you travel from Grand Anse to St. George’s, so it’s easy to find.

No doubt as the Port Louis brand spread, I expect this area to become very popular.

A quick run down on some other observations:

So basically the Victory Bar has all the markings of a fun place, it was just our luck, maybe, that we went there on a very slow night. I plan to give them a second shot, maybe for a mid afternoon snack, lunch, or on a weekend.

How about you? Had a good experience at the Victory Bar?… Tell us about it.