I had not heard of Umbrellas Beach Bar on Grand Anse Beach until Shara brought it to my attention. Thank You Shara. Here is her review and a few pics of Umbrella Beach Bar and Restaurant:

Hey Gooch,
Next time you’re in Grenada you should check out Umbrella’s Beach Bar, it’s on Grand Anse beach, you can get to it via the access road to the beach between Coyaba and St. George’s University (old campus). There’s enough parking at the end of the road and in front of the building. 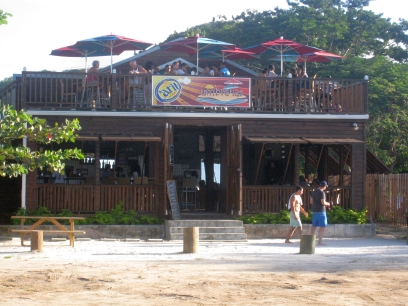 We got there around 7:30 PM and were greeted by a friendly waitress. It’s a two level building, the seating on the upstairs has umbrellas off course; no umbrellas downstairs. We sat downstairs because it had been raining off and on that evening, although there were some people upstairs who didn’t seem to care about that.

Even though it was a weeknight it seemed to be relatively full, looked like an after work crowd was there as well as some visitors. We had our choice of sofa seating or tables, so we had our first drink on the sofa and dinner and the rest of the drinks at a table. The rum punch was pretty good, you could actually taste (and feel) the rum, (not sure if that’s a good or bad thing). My friend requested a drink that was not on the menu, gave the waitress the “recipe” and the bartender mixed it for her, it was good enough that she had two! Same with the rum punch for my sister and me.

The food is pretty tasty, my sister had the Grilled Veggie Salad and my friend had the Umbrellas Burger, they both said their dinner was good. I had the Catch Sandwich, on that day, the catch was Mahi Mahi and it was pretty good. It seems that you could have your choice of white or wheat bread, but on that day they were out of wheat bread. In general the food is appetizers, salads, sandwiches and desserts, all relatively light, nothing very heavy. I’m not a big drinker but from my perspective the drinks menu looked pretty good. 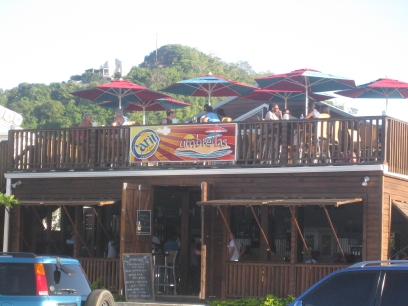 Umbrellas is not open very late, it’s closed on Mondays. Fridays and Saturdays it closes at 10, Tuesday – Thursday closes at 9 and I believe it closes at 8 on Sundays. A bell is literally rung at closing time, which I assumed was simply a last call, however, the waitress hurried us up to pay the bill because they had to close out the register! They started turning down the chairs and pulling down the windows shortly after that. It almost feels like you’re being chased out, we didn’t like that at all. So it’s the kind of place that you can go to if you’re spending the day on the beach, or if you want to have early dinner and drinks.

In general I would recommend Umbrellas Beach Bar, the food and drinks are good, the wait staff is friendly and nothing beats hanging out with friends having dinner and drinks, looking at St. George’s in the distance and listening to the waves crash ashore.